The American comedian, rapper, and television host described 2020 as the most “f***ed up year he has ever witnessed” and also talked about his friend who took his own life. He added that he is in “dark contemplation of continuing my physical existence on this planet,” and admiring his friend who “had the balls to do it.”

The show host also talked about his friend Ryan Bowers, an upcoming rapper he signed who was shot in his home last year by a San Diego cop. He recalled how Bowers was in a coma for months, fought hard, and also re-learned basic functions like walking.

Cannon further revealed that though Ryan seems to have rebound and also returning to perform to sold-out crowds, he is however hurting and whispering that “everything still hurts.”

Just when I thought it couldn’t get any worse… 2020 is definitely the most fucked up year I’ve ever witnessed! After waking up & barely rising from my own dark contemplation of continuing my physical existence on this planet, this powerful warrior actually had the balls to do it. I’ve said it once and I will say it again, this was the strongest dude I’ve ever met! Just over a year ago a San Diego Police Officer rushed in his home and unjustifiably shot him placing him in a coma for months.

I stood by his bedside and promised him that if he made it out & fought the good fight that I would make his dream come true and put his album out and share his story with the world. He fought and fought, he woke up, they stitched him up, he learned to walk and talk again and within months we were back in the studio recording. Even through his strength he would whisper to me that “Everything Still Hurts”.

His music was definitely his safe haven and it was amazing. Paying for lawyers, putting money in his pocket, even putting the music together all meant nothing because I feel like I failed my little brother. The Cops will get away with shooting another kid, everyone will just look at this as yet another loving farewell post, but to me @ryanbowersob was so much more than that. Once again my brother you have put this world in perspective for me.

You would do that quite often because I never understood how someone who was experiencing sooo much pain could still laugh and smile through it all. This photo was the last time we seen each other in person. It was your first show back! Soldout crowd in our hometown San Diego and you rocked it!! You were so happy!! Proved to so many that you could do it and that you were Super Human!

The greatest comeback I ever saw!! We almost made it little bro! But I guess even flying Super Heros have to land eventually. But I am certain that your energy will never die and your Spirit is eternal, so I ask you still to forgive me for letting you down Warrior. I can’t help but think if I wasnt so engulfed in my own bullshit I could’ve been there for you when you finally took your life after several attempts… Fuck this place!! #CantWin #ForLosing 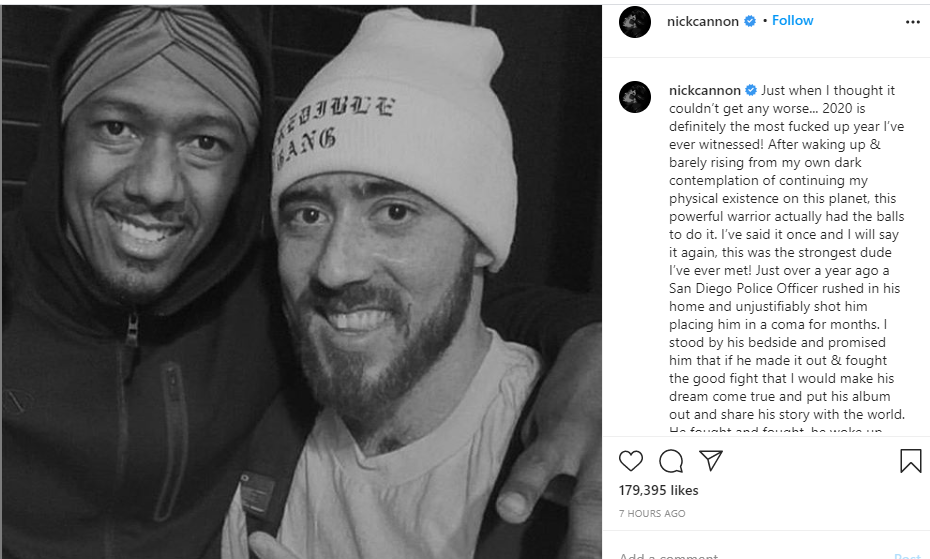 Nick Cannon came under fire last week for a series of anti-Semitic comments he made on his podcast “Cannon’s Class.” After his comments went viral, ViacomCBS fired him from his veteran comedy franchise “Wild ‘N Out.” But instead of retreating, the 39-year-old pushed back.