Mr Egyir, until the appointment, was Deputy Director-General.

A press statement signed by the Director of Communications at the Presidency, Mr Eugene Arhin, on Wednesday, 21 July 2021, stated: “The President has also asked the Director-General of the Prisons Service, Mr Patrick Darko Missah, to go on terminal leave from Sunday, 1st August 2021, with his retirement from the Service set to begin on Saturday, 16th October 2021″. 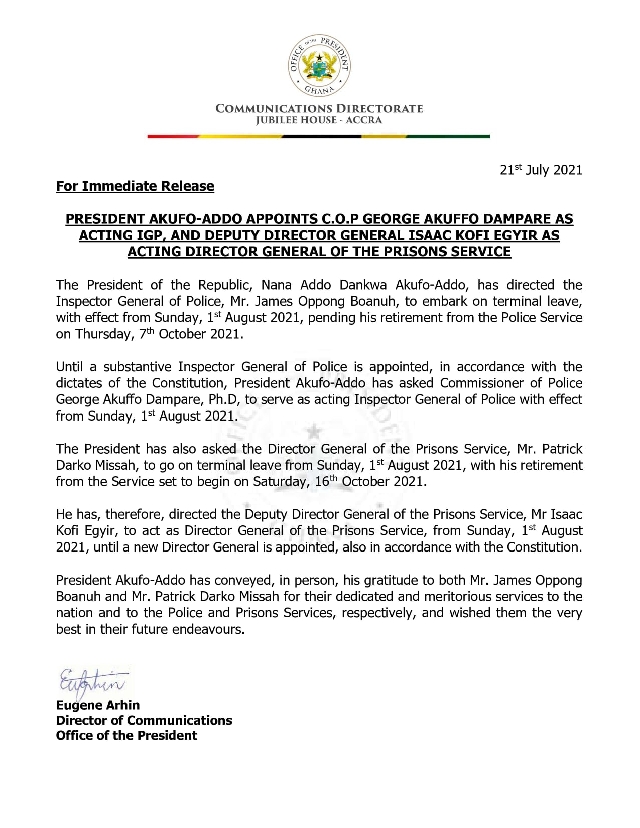 Mr Isaac Kofi Egyir, born on 21 August 1964, is a seasoned Prison Officer and currently the Deputy Director-General of Prisons (DDGP) in charge of Operations.

He has 26 years of working experience with the Ghana Prisons Service including five years duty tour with the United Nations Department of Peacekeeping Operations in Sudan and South Sudan as Corrections Advisor and Military Detention Manager respectively.

He was enlisted into the Service 0n 5th December 1995 as Officer Cadet and was commissioned as a Deputy Superintendent of Prisons on 5th July 1996.

He was adjudged best cadet in Corrections Management and eventually the Best-all-Round Officer Cadet and received the Sword of Honour.

Prior to his appointment as Deputy Director-General of Prisons, he was the Director of Prisons (DOP) in charge of Operations.

He also served as Chief Agricultural Officer of the Service.

Within the International working environment, he has played a key role in prison assessment and advised extensively on best practices of prison management as well as capacity-building activities for national civil and military prison staff of post-conflict countries.

He is a proud product of St. Augustine’s College, Cape Coast.

He holds both an Advance Executive and Executive Certificates in Security Management, Forensic and Investigative Psychology from Wisconsin International University College.

He is married with three children.

Live Updates: #FixTheCountry demo takes off as hundreds join in