There is tension in all 33 districts and Municipalities in the Eastern region following the circulation of a list purported to be names of Municipal and District Chief Executives (MDCEs) nominated by President Akufo-Addo for the Eastern Region.

Some aspiring MDCEs in the region whose names were found in the list were seen jubilating on the streets.

The Municipal Chief Executive for Suhum, Margaret Darko Darkwa, for instance abruptly ended a meeting she was holding with some staff at the Assembly and heads of committees, jumped into her official vehicle, bought handkerchief and powder, and went berserk on the streets of Suhum casting aspersions against her opponents vying for the same position and their supporters.

The situation has created apprehension in many districts and Municipalities with some supporters of the NPP threatening mayhem. 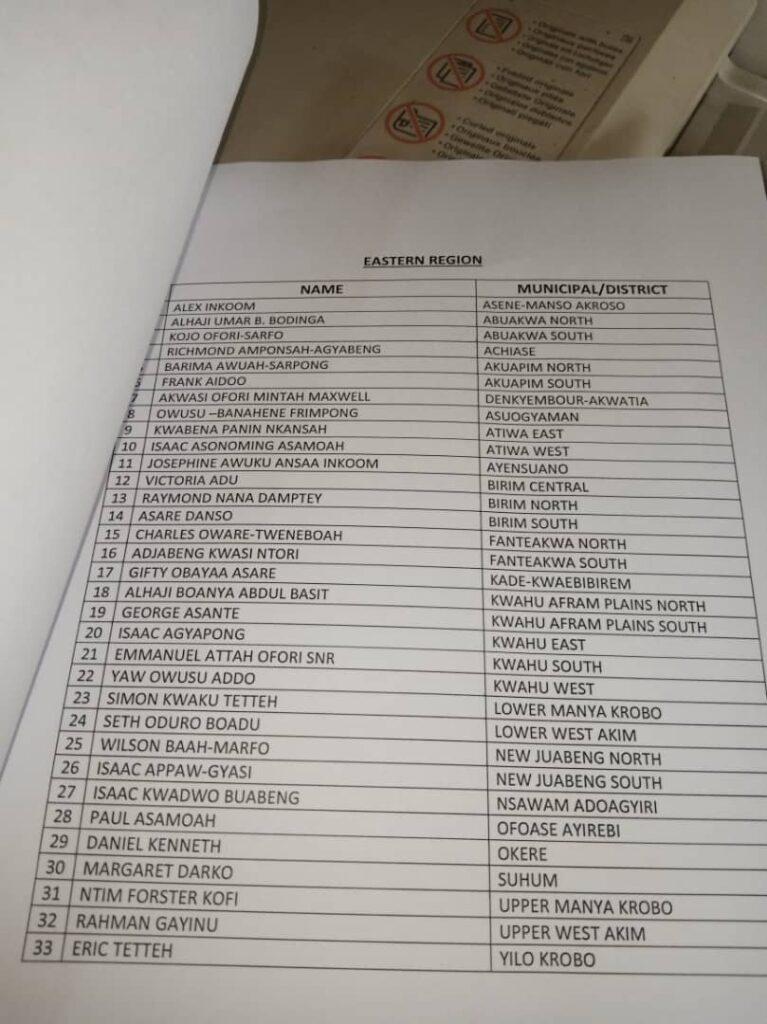 “This trick of the NPP I believe is never going to work this time around. We have known you from ministerial appointments, deputies, CEOs, board, and now MMDCEs. The ‘ma try ma kw3’ won’t be tolerated this time around. Why only Eastern region? Is it because of interest from the office of the chief of staff? Testing the waters but too hot to swim in. Suhum waters is too hot. We are sorry,” Gosh Baah a staunch NPP supporter in Suhum said.

However, a statement issued Monday, July 26, 2021 by the Eastern Regional Secretariat of the governing New Patriotic party (NPP) under the signature of the Regional Director of Communication David Prah said “the Eastern Regional Executives of the New Patriotic Party under the able Chairmanship of Hon. Kiston Akomeng Kissi wishes to state categorically and unequivocally that the list being circulated on social media purported to be the list of Municipal and District Chief Executives of the Eastern Region is FAKE and must be disregarded. The said FAKE MMDCEs list is believed to be causing apprehension and uneasiness among some party faithful in the Region”.

The statement further noted “In some cases, the said FAKE list has resulted in widespread and spontaneous jubilation among other Party Members in the Region. The Regional Executives wish to use this opportunity to inform Party Members and the entire people of Eastern Region to disregard the said list on the social media and treat it with the contempt it deserves”.

Eid-ul-Adha: Pray for peace ahead of 2020 polls – Akufo-Addo urges Muslims