The British High Commission in Ghana has admonished its nationals to stay away from public gatherings after violent clashes in Ejura in the Ashanti region, leading to the deaths.

Two people were shot dead by the military with over seven people injured during violent clashes at Ejura. The clashes occurred after a social media activist was attacked by a mob and beaten to death for making the government unpopular.

In a tweet, the High Commission in a tweet expressed their concerns over the reports of violence in the country.

“We are concerned about reports of violence and saddened by the news of deaths in Ejura. Our thoughts are with the families and community at this time.” 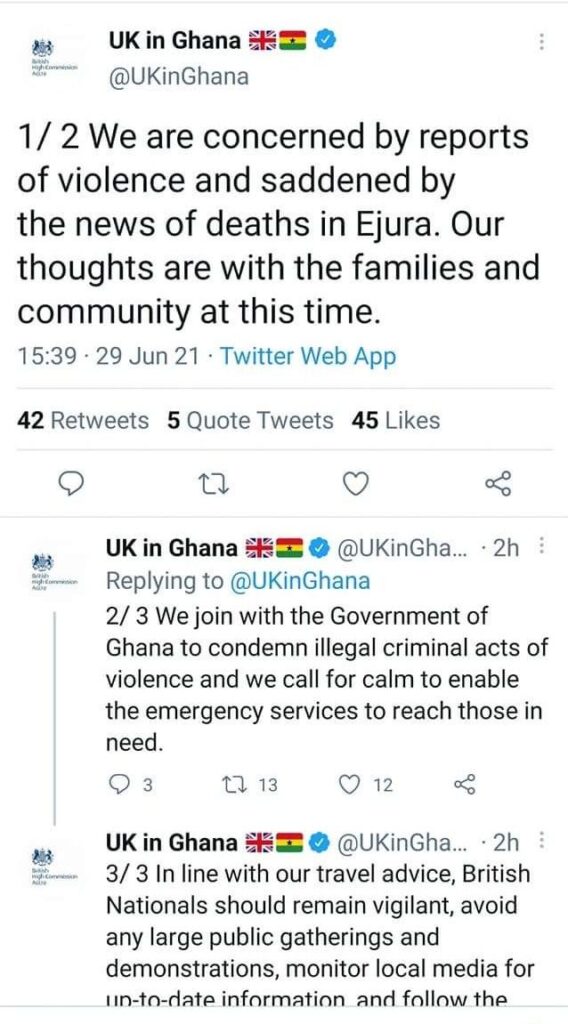 At least two people were shot dead in a clash between Police and protesters at Ejura in the Ashanti region Tuesday afternoon.

Four others are also in critical condition after they were shot by the joint security personnel.

One of the victims, according to the Ejura Government Hospital medical superintendent, was brought in dead to the facility while the other died 10 minutes after arrival.

READ MORE  Ejura: Angry mob charged on us with firearms, clubs, machetes, stones; we fired into the crowd – Police

According to police, witness accounts show that Ibrahim Muhammed was ambushed in front of his house when he was returning home on his motorbike at about 1:30 am on Sunday, 27th June 2021.

He was subsequently rushed to the Komfo Anokye Teaching Hospital in Kumasi where he was put on oxygen until he passed Monday afternoon.

Ibrahim Muhammed was noted to be a known voice on both local and national issues using his Facebook page.

Unconfirmed reports suggest he’s a member of the Economic Fighters League and recently the #FixTheCountry movement.

READ MORE  What you need to do on December 7

Earlier threats to his life were reported to the police but no action has yet been taken, reports say.

A statement by the protest group said the Police rather warned the deceased to be cautious of his utterances which were deemed to be making the government unpopular.

Mahama is a leader you can trust – Otukonor