Asamoah Gyan has apologized for his outburst following Majeed Ashimeru’s omission from Ghana’s squad for the 2022 FIFA World Cup playoff match against Nigeria.

Gyan was enraged to find that despite Ashimeru’s impressive performances in Belgium, the Black Stars technical team, led by his former Black Stars teammate Otto Addo, had not invited him to the important games.

“This guy Majeed Ashimeru is the best midfielder in Ghana, after Thomas Partey, period. I have kept quiet on this but this nonsense must stop. Smh,” Gyan tweeted. 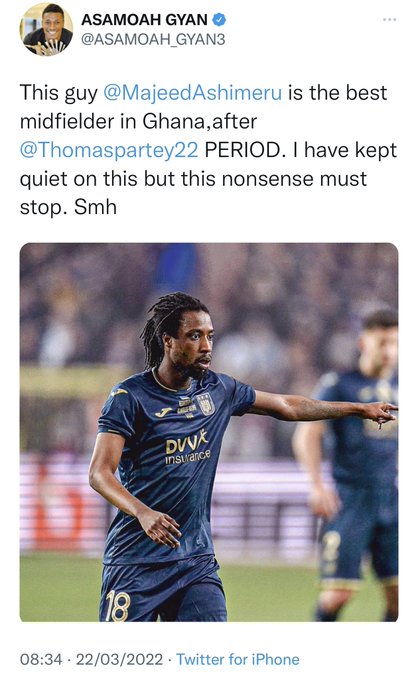 “I still insist that Ashimeru deserves to be in this current Black Stars BUT am sorry for using the word “Nonsense” in my statement so I unreservedly withdraw that word, I was carried by my emotions. Go Ghana,” he wrote.

After missing out on the Africa Cup of Nations earlier this year, Ashimeru was expected back in the team owing to his impressive displays in the Belgian top-flight for Anderlecht.

Latest on Ghanaian referee who collapsed during Afcon game

We can borrow you strikers – Yakubu Ayegbeni mocks Ghana