Ghana has had a rich history in especially the way it relates to foreigners. One of such is the ‘smooth’ relationship with Jimmy Moxon (Roland James Moxon), who became Nana Kofi Onyaase and played a very instrumental role in Ghanaian chieftaincy.

Jimmy Moxon was a colonial civil servant who moved to the Gold Coast (Ghana) during World War II.

Born in Shrewsbury on January 7, 1920, Jimmy Moxon was educated at Donestone School, Macclesfied (where his father was the headmaster) and St John’s College, Cambridge, where he read History.

He embarked on a journey to Africa after his education in 1942 and when World War II ended, and Ghana became independent in 1957, he became a District Commissioner (DC) and served in various Gold Coast stations including Dodowa, Aburi, Kpando and Accra. At the time, a DC was the local potentate and many ‘arrogant and insensitive’ ones among them were hated by the local communities.

To Jimmy, rural administration was an opportunity to submerge himself in native lore and customs.

He was a great raconteur, combining diplomatic sensitivity and courtesy with acute and penetrating observation and he was soon very popular not only in colonial service circles and amongst the sophisticated elite that was preparing itself to rule the future Ghana, but among the townsfolk and villagers with whom he also came in frequent contact.

Osagyefo Dr Kwame Nkrumah, Ghana’s first President insisted that Jimmy stayed in Ghana after the country gained its independence from the British.

He became a valued adviser and confidant to Nkrumah. He was then appointed as the Orwellian sounding Minister for Information.

He played a major role in setting up the Ghana Information Service and especially its film unit, and his ever-widening circle of friends came to include both Nkrumah and the American capitalist Edgar F. Kaiser, who made such a contribution towards the economic development of Ghana (Gold Coast).

Moxon’s friendly diplomacy contributed significantly to the successful completion of the Akosombo dam and associated aluminium smelting complex at the new Ghanaian port of Tema. (All these he extolled in his book Volta, Man’s Greatest Lake, published in 1969 by his friend Andre Deutsch).

Jimmy lived in Ghana for his whole life and only visited Britain once a year to either visit his family or for medical reasons. After he retired in 1963, Jimmy was enstooled a Ghanaian chief with the official title Nana Kofi Onyaase, one of the few white men ever to have been officially gazetted as such.

There have been a few honourary chiefs in Africa such as Shirley Temple Black and Isaac Hayes, but Jimmy Moxon and American Lloyd Shirer (who was the Maligu Naa of the Dagomba tribe or ‘Chief of the Preparations’) were the two non-Africans who became ‘real’ chiefs in Ghana.

As a chief, he sported traditional wives and he adopted sons, but otherwise, he never married. Even so, his houses were always full both of young Ghanaian proteges and colourful foreign visitors passing through Africa with introductions to the “great white chief”.

He loved Ghana and, possessing a scholarly, innovative mind, he was ever initiating new projects. It did not much matter that, apart from his writing, he was easily distracted and seldom demonstrated the patience to see them through, since he was invariably eager to pass on new and potentially profitable business ideas and ventures to his many Ghanaian friends.

He encouraged farmers to switch from cocoa to food crops production, a decision that saved many lives in Ghana.

After his retirement from government service, he became a bookseller, publisher, poultry farmer and restaurateur.

He ran Moxon’s Bookshop, near the Ambassador Hotel in Accra, and also tried his hands at running restaurants – all called the Black Pot – which specialised in Ghanaian dishes.

He founded Ghana’s Oxford and Cambridge Society, and through it, kept in touch with many influential people in the country.

Over the years he featured in Figaro as “Gentleman Jimmy, Chef Tribal en Afrique” and in numerous other articles and BBC documentaries.

At the time of his death (from cancer in a Ghanaian hospital), he was engaged in completing his autobiography, centred on his chieftaincy, for a French publisher.

A shrine has been placed in the silk cotton tree that gave him his tribal name; Nana Kofi Onyaase.

Nana Kofi Onyaase, alias Jimmy Moxon, He is the first white traditional chief of the Gold Coast. He was then the district commissioner of the Gold Coast Colonial Service in 1943. He died in 1999 & a shrine has been placed in the silk cotton tree that gave him his tribal name. 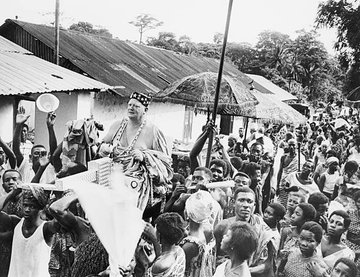 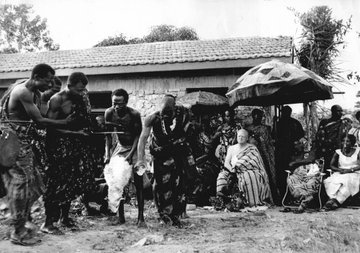 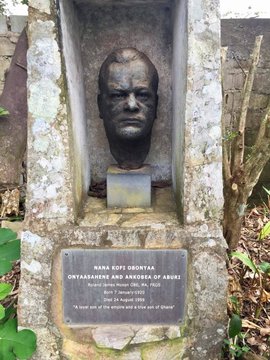 Do you have news to share with DailyNewsGhana.com?
Send to editor@dailynewsghana.com

Drama in court over Mahama video

Sex for Grade: UG’s punishment harsh but we accept it – Gyampo, Butakor

DailyNewsGhana - February 13, 2020
0
'Atopa' video of a Ghanaian female soldier is fast trending on social media. The video saw the female soldier receiving the 'langalanga' from the back,...

DailyNewsGhana - February 1, 2020
0
Ghanaian chief based in the US has been exposed by a slay queen in a leaked video. One can arguably say that Ghanaian slay queens...

DailyNewsGhana - February 23, 2020
0
Member of Parliament for Assin Central, Kennedy Agyapong, has incurred the wrath of some National Executives of the opposition National Democratic Congress (NDC), including Samuel...

DailyNewsGhana - February 1, 2020
0
If you thought you had seen everything that can be described as either crazy or absurd in this world, then you will probably have...

ABOUT US
Dailynewsghana.com seeks to give readers accurate, credible, up-to-date, dependable and balanced news across Ghana and around the world
Contact us: editor@dailynewsghana.com
FOLLOW US
© 2019 DailyNewsGhana.com From The Heart ❤ Of DNG Media Group
MORE STORIES