The National Democratic Congress (NDC) has revoked the membership of 18 of its members for contesting as independent in the upcoming December 7 polls.

“The National Democratic Congress wishes to bring to the attention of all party members, sympathizers, and the public that the following members who sought for and obtained nomination from the Electoral Commission to contest the upcoming parliamentary election as Independent Candidates have forfeited their membership of the party.” 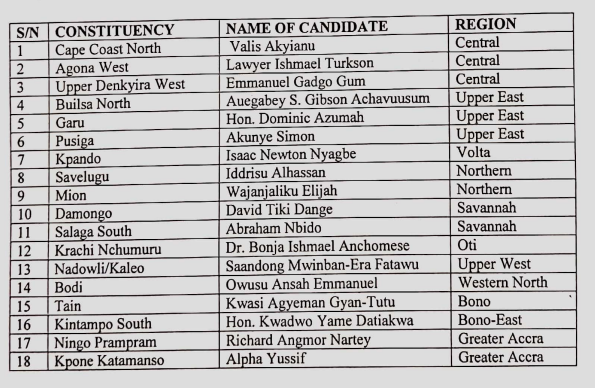 The party made this known in a press statement issued on Tuesday, November 3, 2020.

“It must also be noted that all party members who endorsed your nomination form, campaigned for you or who openly associate themselves with your campaign activities are equally in breach of the above provisions and therefore, suffer the same punishment as the independent candidates.”

The leadership of the NDC also asked all affected persons to handover all-party properties in their possession to their respective secretariats.

“They must handover all party property in their possession to their respective constituency secretariats, and they must cease forthwith in using party paraphernalia and the name of the flag bearer in all their campaigns.”