Human rights activists are demanding justice for an 18-year-old girl, Faith Aigbe, whose ear was allegedly bitten off by one Mr Ogunbor, who claimed to be a retired commissioner of police.

The alleged incident happened at Eweka Street, off Aduwawa Road, Benin City in Edo State on Sunday, November 15, during a quarrel between the victim’s mother and the Ogunbor family. 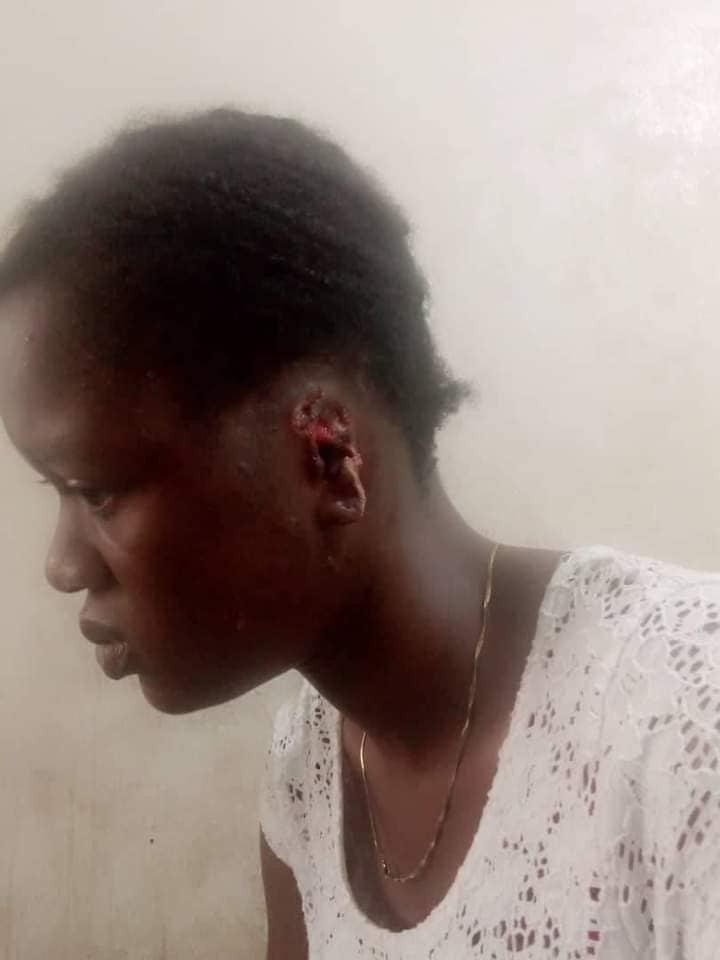 It was gathered that the said victim returned from church to find Mr. Ogunbor, his wife, daughter, and some other family members allegedly assaulting her mother. 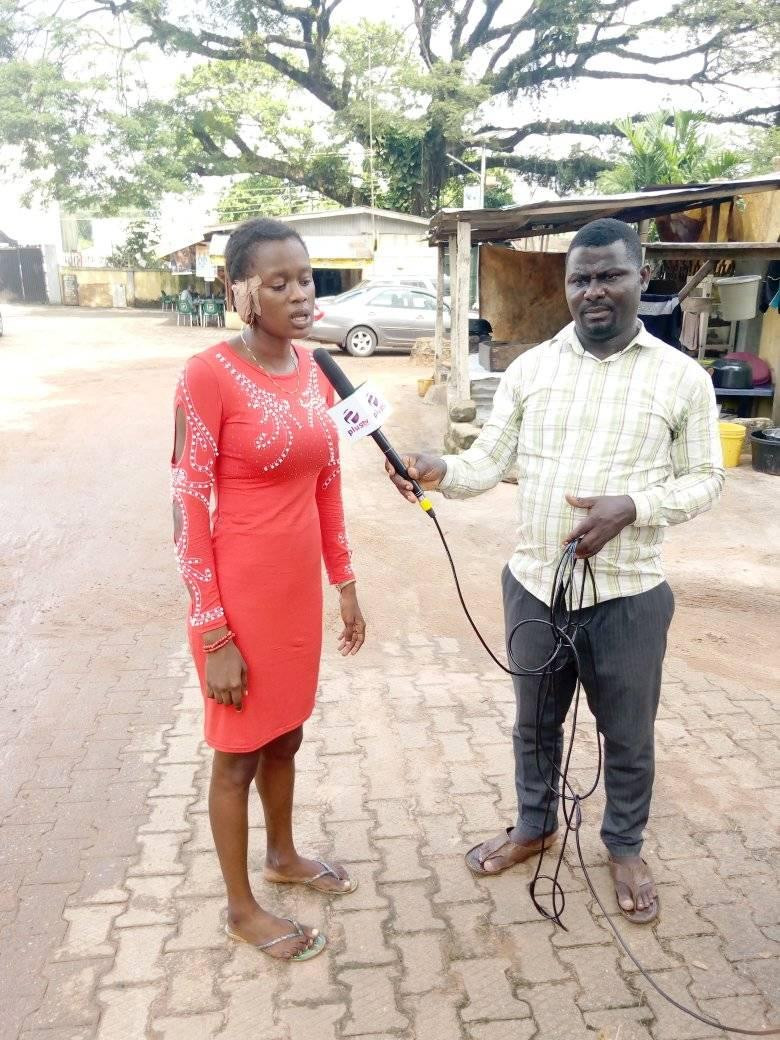 Faith said when Mr Ogunbor picked up a shovel to hit her mother, she quickly held back the weapon. The retired police officer was said to have grabbed Faith and chopped off her right ear with his teeth.

According to the report, Mother and daughter later went to the police station to file a complaint but Mr. Ogunbor arrived there and threatened the police officers, claiming to be a retired commissioner of police.

It was further alleged that Mr. Ogunbor’s son and his boys abducted Faith’s father (pictured) took him to an unknown destination where they beat him up before he was rescued by members of a local vigilante group.

Read the full report by Agbons Osas and photos of the victim with her family at ITV in Benin City.

“That one MR.S.O.OGUNBOR who lives at Eweka street off college road Aduwawa Benin city, as cut the ear of miss Faith Aigbe with his teeth on Sunda. Faith is an eighteen year-old girl.

“This happened as a result of the misunderstanding between Faith Aigbe mother and Mr.s.o.Ogunbor’s wife and his 46yrs old daughter that joined together to fight Faith Aigbe’s mother on Sunday. Faith was coming from church when she met Mr.s.o.Ogunbor and his family together, fighting her mother. mr.s.o.ogunbor rise up a shovel to hit faith Aigbe mother, Faith held mr.ogunbor back and Mr ogunbor rush into faith ear and cut it off with his teeth.”

“The same mr. Ogunbor’s son also went further to abduct Faith’s father with his boys and take him to unknown destination and beat him up,the man was been rescue by d help the vigilante group, faith father is d odionwere of Eweka street.”

“Mr.s.o.Ogunbor who claimed to be a retired commissioner of police,his beaten his right hand on his chest that he will kill faith Aigbe and he ll use money and his influence on her.”

“This is man inhumanity to man. This is aberration, this is satanic and barbaric. This is a man that served to the Apex height of policing that ought to have the knowledge of the law.”

“We are calling all the relevant Authority and the relevant stakeholders in Edo state come to the aid of faith Aigbe. Justice for Faith Aigbe, Faith needs justice.” 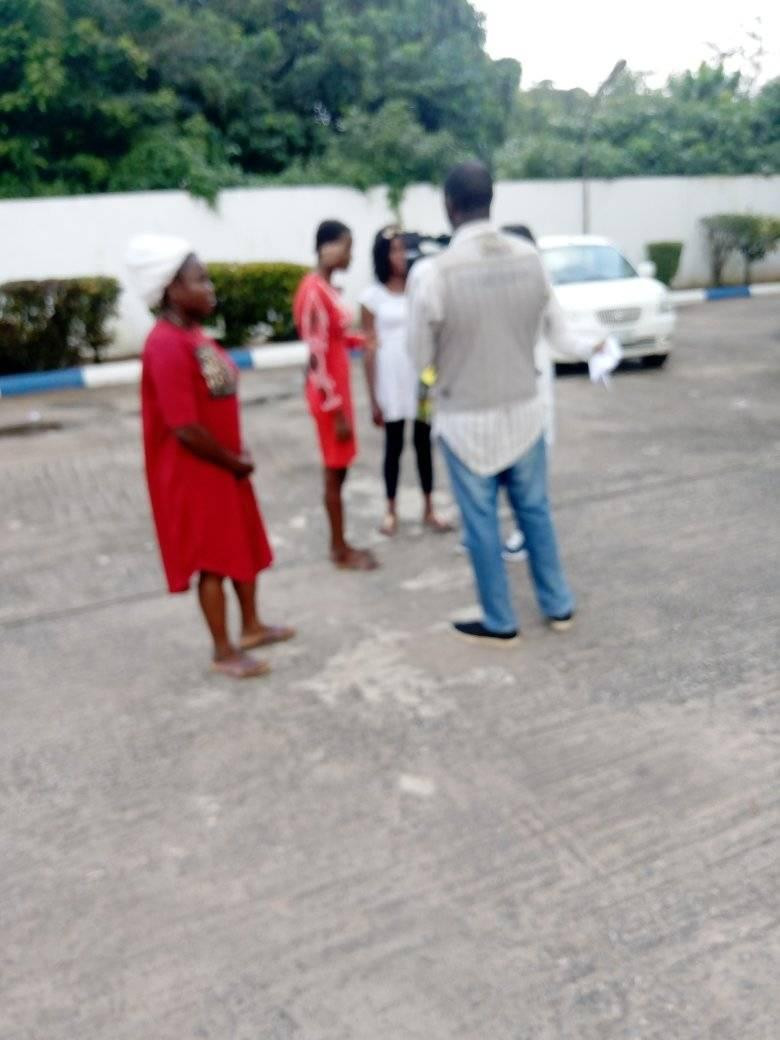 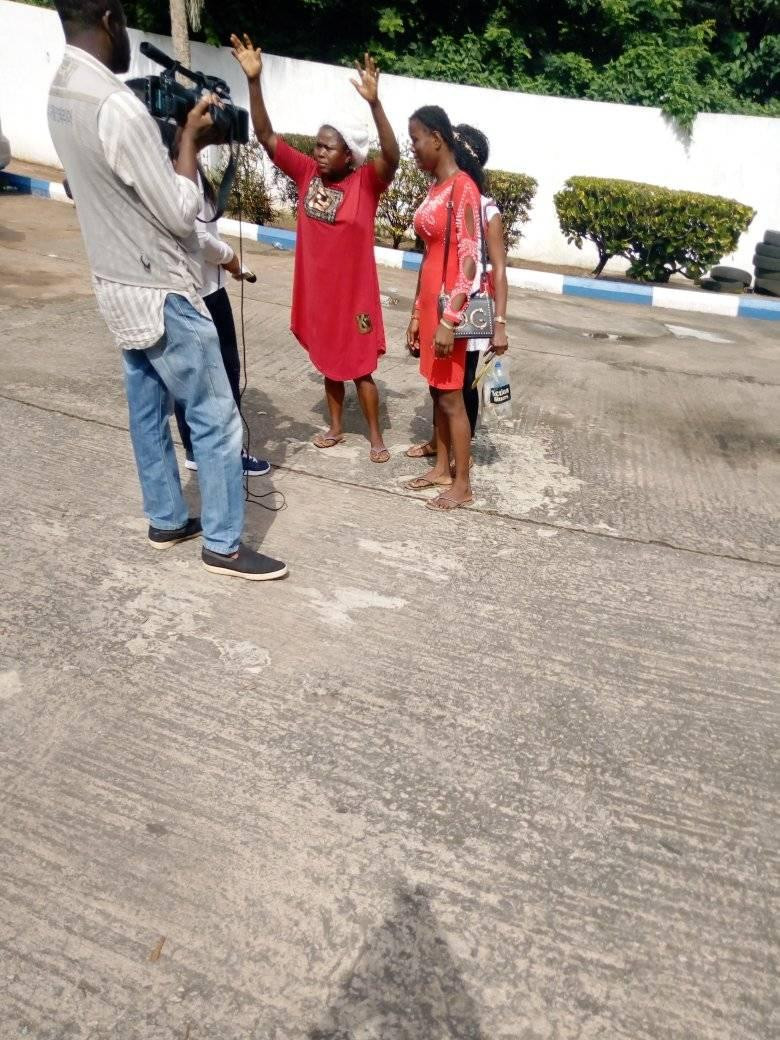 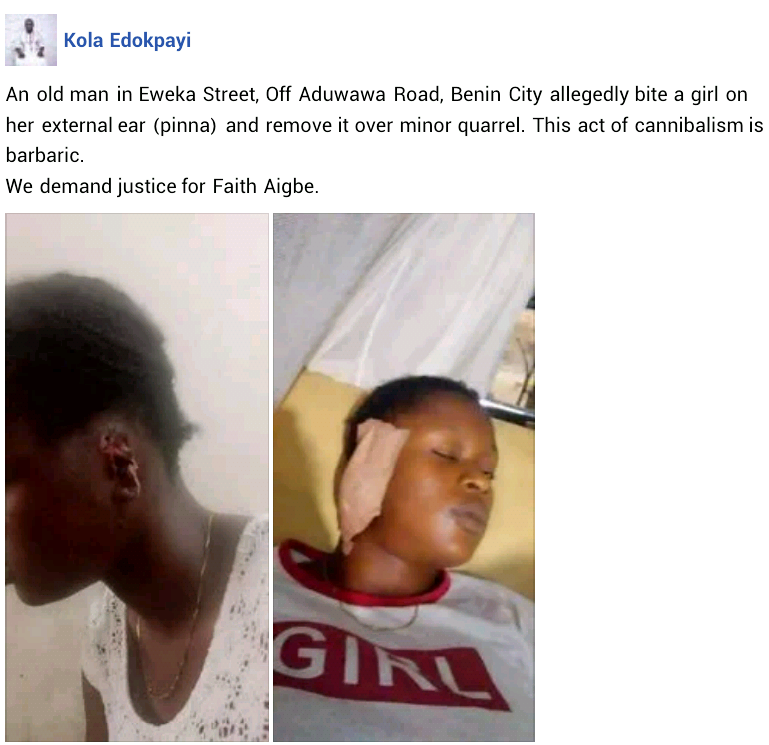 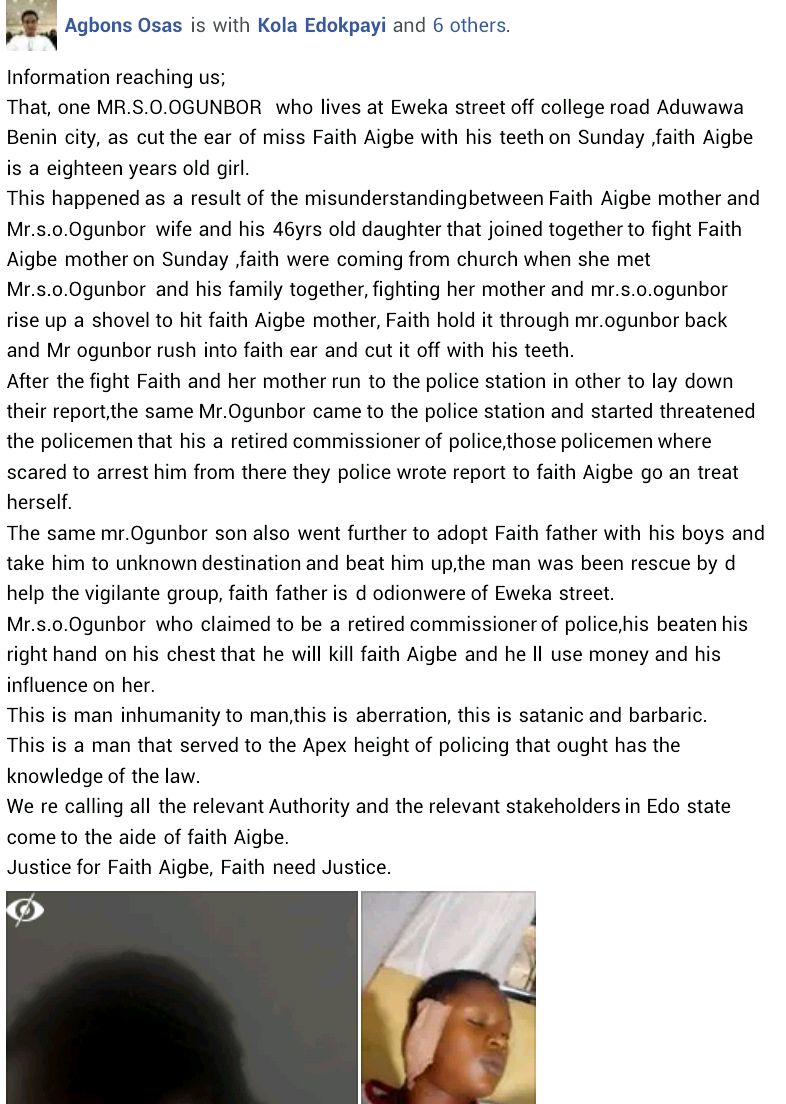 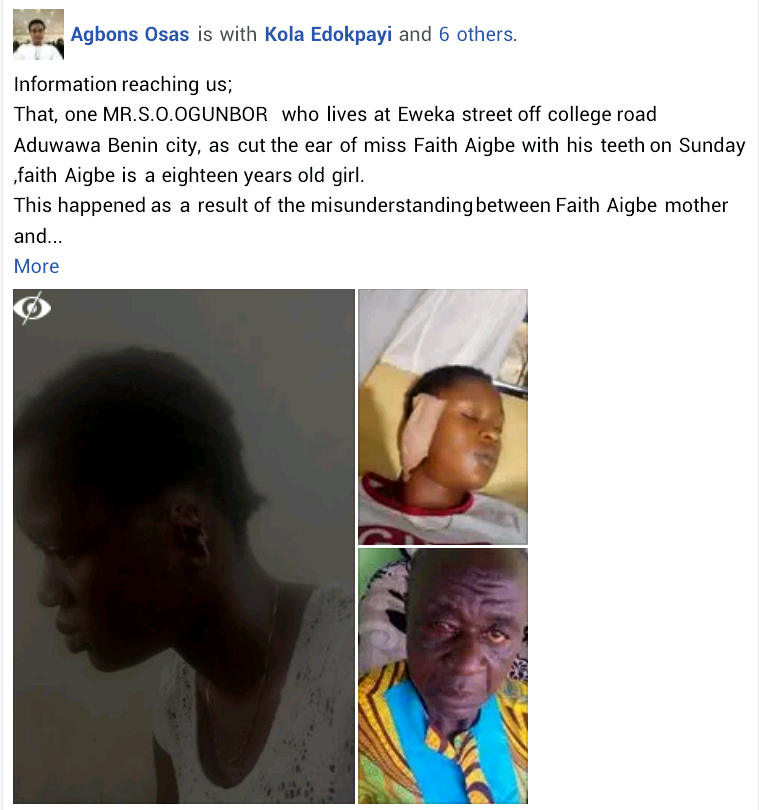 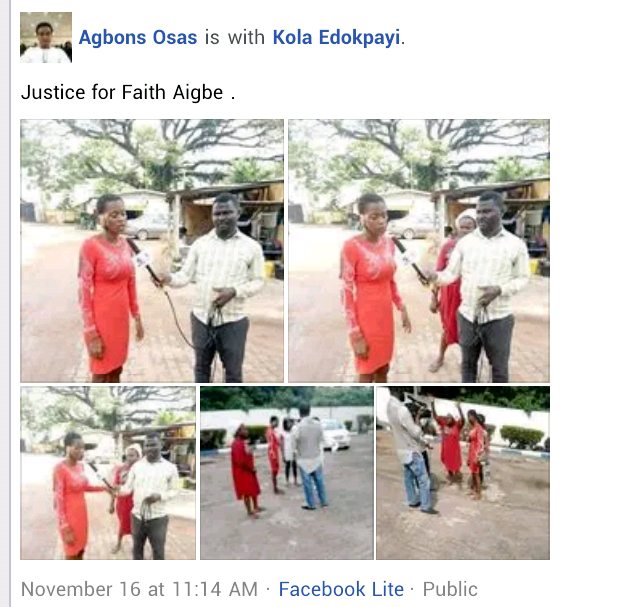 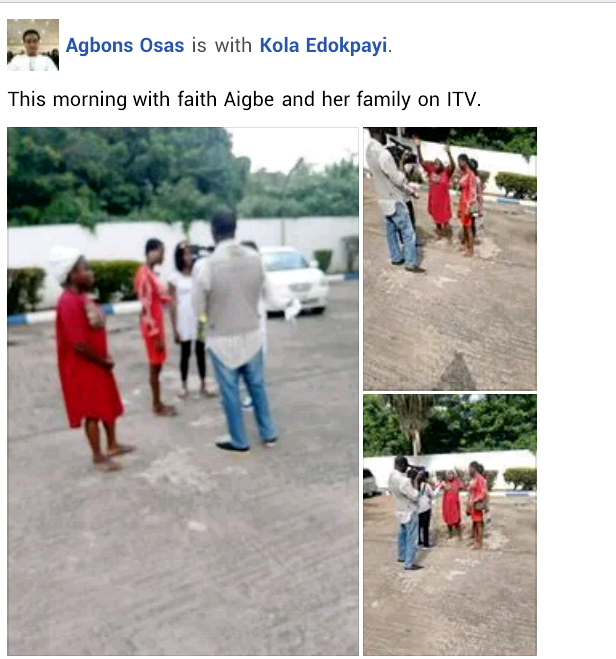 Rapper Vector expecting a baby with his girlfriend